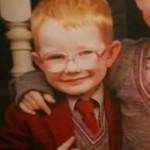 Born to parents John Sheeran – art curator and lecturer, and Imogen Lock – jewelry designer, and to older brother Matthew. Sheeran’s parents regularly expose him to the music of Van Morrison, Bob Dylan, Joni Mitchell, The Beatles, and Elton John. From age four he sings in a church choir with his mother, and at age eleven sees Damien Rice perform at bar. Upon meeting Rice after the gig, Sheeran decides to become a professional musician himself. Describing his musical development:

I picked up a few chords and quite quickly started writing my own songs using other people’s chord structures. By the time I was 14 or so I thought music was something I’d like to do, and then by 16 I started to think it was something I could do. That’s when I took all the big risks.