Fanning signs on for a role in the sci-fi film IO. She will play one of the last people on Earth, who is trying to find a cure for the dying planet before the final shuttle from Earth leaves her stranded. Fanning is set to star alongside actor Diego Luna in the film, which will go into production this year. 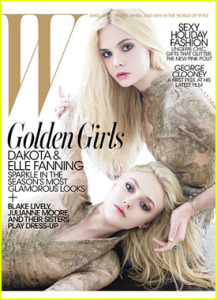 Dakota and Elle appear on the cover of the December 2011 issue of W magazine. Dakota talks about handling fame. Elle talks about Dakota and watching TV shows with her.

Sometimes. We watch a lot of reality TV. My sister and I record Big Brother. We are obsessed! And we love old game shows like Password and the original Family Feud. Also, me and my sister watch Criminal Minds. We record every episode, and we watch it every single night.

Fanning plays Winnie, a curious nine-year-old in the movie Boxtrolls. The movie tells the story of lovable monsters known as the Boxtrolls who live under the streets of the town of Cheesebridge. Winnie befriends Eggs, a human orphan the Boxtrolls have fostered, when he ventures above ground. Fanning:

I felt like maybe she was an unexpected character for me to play, just ‘cause, I don’t know, I’ve never played anyone like her before. She has like this kind of bratty element and she’s like slightly spoiled. But I liked how she looked so sweet on the outside but on the inside she loves like all these little grotesque things, like blood and bones, and it was just fun to play with her. Like, you could really experiment and go all out, and that was fun to just be kind of dramatic in that way. I enjoyed it. And also, I mean, at first when the audience sees her they might not like her than much — she’s a little snooty. But afterwards she wins you over and you realize kind of what she is, and she has a sensitive side and she’s just trying to help Eggs and get the attention from her dad that she wants. And I guess she’s just a very good nine-year-old girl. I like her a lot. Fanning appears on the cover of the September 2014 issue of Miss Vogue Australia magazine. The cover photo is shot by Benny Horne. This is the first print edition of Miss Vogue. 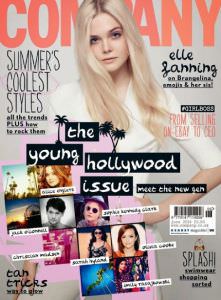 Fanning appears on the cover of the June 2014 issue of Company magazine. She talks about her sister, Brangelina, and Maleficent compared to Sleeping Beauty.

I think in the original animated version of Sleeping Beauty, Aurora is definitely kind of a delicate princess and loves all things, everything you think a princess is, all those characteristics she definitely has,” she shared. “But in ours she is still that way, she loves everyone and is very open…but it’s nice for Aurora in this film, she has more depth… It’s nice that I could bring more layers to her and have more strength than just the pretty, pretty princess who is in the original Sleeping Beauty. 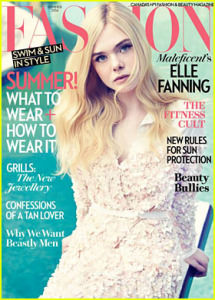 Fanning appears on the cover of the Summer 2014 issue of Fashion magazine. She talks about her co-star Angelina Jolie, stereotypes in films, and her love for acting.

I always think of it as make-believe. That’s why I love this job, and think I’ll never get tired of it: You are creating something you haven’t felt or experienced before. 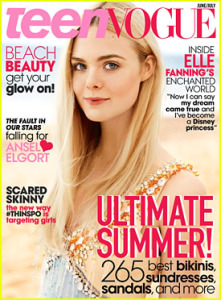 Fanning appears on the cover of the June/July 2014 issue of Teen Vogue magazine. She talks about boys, SnapChat, and working with Angelina Jolie on Maleficent.

When I met her, she gave me a huge hug and she took my shoulders and said, “We are going to have the best time working together!” And we did—we had the best time! She has a huge presence. She would walk around set all the time with her giant Maleficent staff because she said she had to get used to it—she said it had to become a part of her, since Maleficent and the staff are so connected. Everyone would just stare at her! With the cheekbones, the staff just made her more like…”Oh, my God!”

Fanning stars in this fantasy film directed by Robert Stromberg and based on the story of Sleeping Beauty. She takes on the role of Princess Aurora, who is cursed into a death-like sleep by Maleficent, who is played by Angelina Jolie. Her co-stars include Sharlto Copley, Kenneth Cranham, and Sam Riley.

I’m glad that our film is like that. Also, the way it ends up, it’s more of a maternal love and a friendship love that wins out, over a romantic love with a guy. That was a nice take on it. 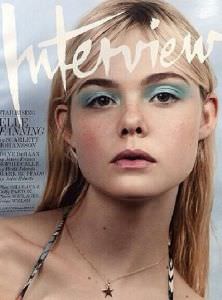 Fanning appears on the cover of the May 2014 issue of Interview magazine. She talks about applying for college, her dream career, and Marilyn Monroe.

I was 7 when I first saw a picture of her. I didn’t know that she was such a big icon. But I would just look at her and I was mesmerized. She was beautiful and so … truthful. She’s not faking it. If she’s having a terrible day when the picture was taken, she’ll show that she’s really depressed and having a terrible day. You can see it in her eyes. There are all the layers behind it. Fanning appears on the cover of a February 2014 issue of New York magazine. She talks about fashion treasures, movie roles, and her nervous tic.

I write [‘Bob Dylan’] on my hand every day in school, mostly when I’m bored. I’ve been doing it since I was pretty young. I used to do it for fun, but now it’s a nervous tic. 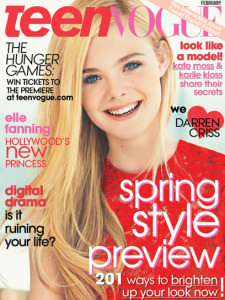 Fanning appears on the cover of the February 2012 issue of Teen Vogue magazine. She talks about her hobbies, giving her older sister fashion advice, and acting in We Bought a Zoo.

I never really pull from experience. I just sort of make believe. That’s why I like acting. You can create or imagine anything. It’s not like I’ve fallen in love, but I’ve had crushes and things.

Fanning stars in the movie We Bought A Zoo. The movie, directed by Cameron Crowe and based on a true story, tells the tale of Benjamin Mee, a widower with two children who buys a zoo. Fanning plays the younger cousin of a zookeeper. Fanning:

I loved coming to work all day and seeing all the animals and everything. It’s funny. It’s really sweet. It’s very like uplifting you definitely feel like, ‘Wow that was such a fun movie to go see. 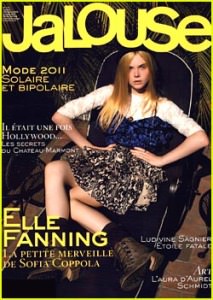 Fanning appears on the cover of the January 2011 issue of Jalouse magazine. Stephen Dorff talks about working with Fanning.

Elle was my equal, and sometimes I forgot that she was 11. Sometimes I still forget that she’s 11 because she’s going to be six feet tall. She’s growing like crazy, and I tell her to slow it down until we get through the release because I feel like mini-me when I stand next to her on the red carpet. She said she was trying.

Fanning stars in this fantasy thriller film adaptation directed by Andrei Konchalovsky. She plays the heroine Mary, who receives a magical nutcracker for Christmas from her uncle, played by Nathan Lane. Along with the other toys, she tries to save their kingdom from the evil Rat King, played by John Turturro. Her co-stars include Charlie Rowe, and Frances de la Tour.

It was really fun and it was amazing. I worked with all these great people, and got to sing and dance. It was really cool.

What's this? This is an unbiased just-the-facts news timeline ('newsline') about Elle Fanning, created by Newslines' contributors. Help us grow it by finding and summarising news. Learn more