Following a judicious review of the claim and facts of this case, my office was able to reach a settlement with the estate of Eric Garner that is in the best interests of all parties. We are all familiar with the events that lead to the death of Eric Garner and the extraordinary impact his passing has had on our City and our nation. It forced us to examine the state of race relations, and the relationship between our police force and the people they serve. [The settlement] acknowledges the tragic nature of Mr. Garner’s death while balancing my office’s fiscal responsibility to the City. 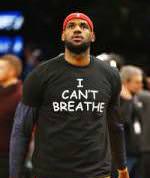 Hundreds of protesters take to the streets of New York and stage in store demonstrations at the Apple Store, Macy’s and Bryant park.

Compression of the neck and chest, along with Garner’s positioning on the ground while being restrained by police caused his death.

New York Mayor de Blasio hosts a discussion with the police commissioner and the Rev. Sharpton to try to ease tensions with minority communities after Garner’s death. Sharpton:

If Dante wasn’t your son, he’d be a candidate for a chokehold. And we’ve got to deal with that reality.

Demonstrators march through the streets to demand justice for deceased, Garner. Demonstrators:

Two EMS workers and two paramedics are suspended without pay when they don’t administer CPR on Garner. Witness, Taisha Allen:

I was distraught, I was upset and mad that the cops had him on the floor like that. And they should have performed CPR on him and they didn’t.

NYPD officer, Pantaleo is placed on modified assignment and stripped of his shield and gun after he is seen choking Garner. NYPD:

The chokehold tactic is prohibited by the NYPD.

Four EMS workers who respond to the Garner arrest are placed on modified duty after they don’t administer CPR on Garner.  FDNY:

The workers are not city employees but work for Richmond University Medical Center.

NYPD officer Pantaleo places Garner in a choke hold and he goes into cardiac arrest. Garner is declared dead at a nearby hospital. NYPD:

Garner suffered a heart attack and died en route to the hospital.

Garner is confronted by police when he sells illegal cigarettes, he raises both hands in the air and tells the officers not to touch him. Officers grab Garner, place him in a choke hold and pull him to the sidewalk. Garner:

What's this? This is an unbiased just-the-facts news timeline ('newsline') about Eric Garner, created by Newslines' contributors. Help us grow it by finding and summarising news. Learn more