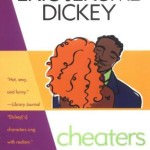 Dickey’s book Cheaters describes how even good people can have bad luck when dating. Character Stephan loves them and leaves them, just like his father. Character Chanté thinks she’s found her dream man, until his wife and kids come banging on her door. Character Jake on the other hand is a player and he just can’t shake the bad dreams he’s been having. Darnell is faithful to his wife, but the temptation to step outside his marriage is getting tougher every day. Tammy is caught between the man she loves, and the woman he’s promised to. And Karen is constantly lecturing her friends about fooling around, but she is not living up to her own high standards.

In Cheaters, I had a character, Darnell, who wanted to be a writer, and now I wanted to write about somebody who had been in the business for a while. So I thought about making the narrator Darnell, but that would mean that the woman who’d left him would have to be Tammy, and getting those two characters to this place just wasn’t going to work.