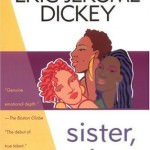 Dickey follows the lives of three sisters in the book Sister Sister.  This book describes the lives of three young African American women. First there is Valerie, scheming social worker Inda and broken-hearted flight attendant Chiquita. Their lives are coming together and falling apart in Los Angeles.