Hawke appears on the cover of the January/February 2015 issue of Manhattan magazine. He talks about taking the road less travelled.

Hawke, one of the co-stars of Dead Poet’s Society, tells Jian Ghomeshi for CBS Radio:

Even (to me) at 18, it was obvious he was in a tremendous amount of pain. Anybody who was watching knew.

Elle Magazine interviews Hawke about the romantic characters he plays and if real women expect him to be like those characters.

I can’t tell you how many times in the ’90s I’d meet somebody, we’d be having a nice time, and they’d sigh and go, “This is exactly like Before Sunrise.” And I’d have to get up and leave. 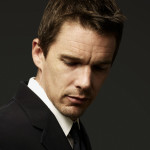 Hawke plays federal agent Jack Valentine in this crime drama directed by Andrew Niccol.  Valentine is hot on the trail of the world’s greatest arms dealer, now all he needs is the evidence to prove it.  When Valentine finally gets the break he was waiting for, his superiors have a nasty surprise for him. Also starring Nicolas Cage, Bridget Moynahan and Jared Leto.

The devil is seductive, and so guns are glorious in the culture. I understand there’s a case to be made. For instance, Spike Lee said something like this, that you can’t have a scene with drugs in a film that doesn’t secretly make you want to do drugs. In the same vein, it’s hard to make a movie that’s anti-violence because the very nature of photographing violence eroticises it. But I’m not so sold that that’s true.

In this police action thriller directed by Antoine Fuqua, Hawke plays officer Jake Hoyt on his first day at a new police precinct.  His training officer has quite a day in store for him as they travel back and forth across the city leaving murder and mayhem in their wake. Also starring Denzel Washington and Tom Berenger.

Training Day was my best experience in Hollywood. And a lot of that you have to give up to the fact that, pure and simple, Denzel Washington is a great movie star. Each generation there’s two or three – and he’s it.

What's this? This is an unbiased just-the-facts news timeline ('newsline') about Ethan Hawke, created by Newslines contributors. Make it grow it by finding and summarising news. Learn more