What's this? This is an unbiased just-the-facts news summary about Fall Out Boy, extracted from the original article by Newslines' contributors. To see the newsline of each topic, click the links below. Learn more 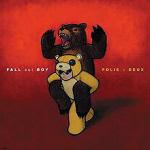 Fall Out Boy releases Folie à Deux (French for “A Madness Shared by Two” ), the bands fourth studio album. Unlike it’s predecessors, Folie à Deux debutes at number eight on the Billboard Top 100 chart, making it the third top ten album from the band. This album is the first Fall Out Boy album to feature lyrics that are not autobiographical. The album features Lil Wayne and Pharrell, along with Blondie’s Deborah Harry. Joe Trohman:

We mix the influences in a way that sounds new and complete. But they all can’t work. For instance, I love heavy metal. But for me to insert Randy Rhoads licks into Fall Out Boy’s music, it’d sound crazy. So I hold back, which creates a cool kind of tension. I think casual listeners can pick up on that, even if they’re not sure why it’s happening.