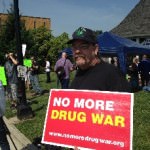 Citizens from around the state gather in support of the injured toddler, against the sheriff, and against the war on drugs, at a rally in Clarksville.  Attendees comment,

People should be able to make their own choices about their own health and not have to be injured or killed while making those choices.  I’m [in favor of] ending the drug war in general, on top of helping this particular child.

If they would have done their homework [before the drug raid], they would have known there were children inside.  Now they’re trying to blame the family, and it’s not their fault.