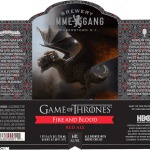 Ommegang and HBO jointly announce their third beer in the Game of Thrones line: Fire and Blood Red Ale. The beer will be released in Spring of 2014 in expectation of the show’s debut of Season 4. The ale is inspired by House Targaryen, featuring a series of labels, one for each of the three dragons on the show. Leinhart comments on the brew:

Once again, we really worked hard to ensure the beer tied nicely into the themes of the show.  Obviously the use of ancho chilies pays homage to the dragons, but the use of rye and spelt wheat links back to the Dothraki people that Daenerys is leading – they are nomads of the plains and these are the grains that would be well at home there.