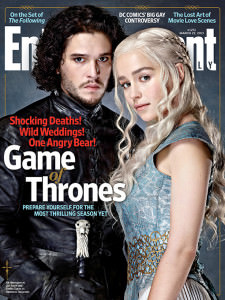 The producers tell Entertainment Weekly that they do not intend to slow the show down or pad it out if it comes down to outpacing Martin’s next two novels.  It’s possible the producers, who know the general idea of the story’s ending, might conclude the show before the last book is released.  Those involved are hoping this doesn’t become an issue. Benioff comments:

Ideally, the books come out first.  ‘We don’t want to become a show that outstays its welcome and tries to turn each book into three seasons. Part of what we love about these books, and the show, is this sense of momentum and building toward something. If we tried to turn this into a 10-season show we’d strangle the golden goose. There is a ticking clock here.