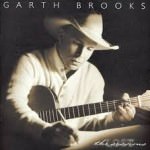 Brooks releases The Lost Sessions, are songs Brooks made but were never published from 1995-2000. The set includes all three of the previously released albums, Sevens, Double Live, and Scarecrow, plus a newly recorded song Good Ride Cowboy (written with Jerrod Niemann) which is a tribute to Chris LeDoux.

I knew if I ever recorded any kind of tribute to Chris, it would have to be up-tempo, happy … a song like him … not some slow, mournful song. He wasn’t like that. Chris was exactly what our heroes are supposed to be. He was a man’s man. A good friend.