What's this? This is an unbiased just-the-facts news summary about Genesis (Band), Steve Hackett, extracted from the original article by Newslines' contributors. To see the newsline of each topic, click the links below. Learn more 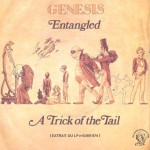 Entangled is released as a single in France, with Trick of the Tail on the B-side. Hackett:

It was really the psychiatrist couch. Whether you place it in a hospital or somewhere else, it was the idea of drifting in and out of consciousness. I remember when I first had the lyric ready and I showed it to Phil who was going to sing it and he said this has got a Mary Poppins feel to it … Over the Rooftops and Houses. Indeed, the whole world of Disney cartoons and the attendant music was a huge influence on Genesis. Certainly throughout the 70’s, beyond that … possibly less so for them, but then I really shouldn’t comment on what they did post Gabriel and post me…I was thinking on the lines of Crosby, Stills and Nash and I was thinking of Graham Nash’s voice. Funny enough, I’ve run into Graham a few times in recent years and very often in the same place in New York. When I think of harmony I often think of the sound of his very sweet high voice. I think if a band that has three part harmony and can have the sweet voice on the top then the sunshine can really come out of those harmonies. So I was thinking of that … working a song that was less dependent on the lead singer and more on a harmony sound. I often still take that approach myself. Entangled is a song that I’m really proud of.