What's this? This is an unbiased just-the-facts news summary about Geoffrey Rush, extracted from the original article by Newslines' contributors. To see the newsline of each topic, click the links below. Learn more 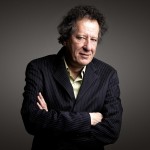 Rush gives an interview to The Talks. He discusses how much he enjoys wearing tights, how he goes with the flow, and when he broke into mainstream.

I did a lot of work in the theater, which is a very low level of media interest, particularly in Australia, and suddenly when Shine came out all of the films that I was in came out at the time and I met a lot of wonderful colleagues. The films I was nominated around were things like Lars von Trier’s Breaking the Waves, Secrets & Lies by Mike Leigh, The English Patient… they were all very economically compact, but highly imaginative movies.