Seacrest interviews Rancic during On Air With Ryan Seacrest about her controversial red carpet statement in which she says actress Zendaya’s dreadlocks lookes like she might smell of patchouli oil and weed, causing cast members Kelly Osbourne and Kathy Griffin to quit The Fashion Police.

It’s kind of crazy. Look, it was a tough season to do, obviously without Joan Rivers there. She was the driving forced behind Fashion Police. It just didn’t work. There were all sorts of issues right from the beginning. Then when the whole incident happened with the Oscars show obviously everything imploded form that point on. It’s been sad to watch and it’s been really hard to live through. The past six weeks have been very tough for all of us.

Honestly, you’d have to ask her [Kelly Osbourne] I don’t know [why she quit]. I haven’t spoken to Kelly since the night that show aired. She and I got on the phone and I was like, ‘Kelly what’s going on?’ And she’s like, ‘I don’t know’. I’ve known Kelly a long time, so obviously she was being very friendly and supporting that night. Then, everything just went crazy from there.

Rancic speaks out about her weight-loss critics:

I think the best thing to do, honestly, is not even talk about it. You know? As long as you know the truth, that’s all that matters.

Giuliana, I appreciate your apology and I’m glad it was a learning experience for you and for the network. I hope that others negatively affected by her words can also find it in their hearts to accept her apology as well.

Osbourne praises Rancic and Zendaya via Twitter for making peace over Oscars controversy.

It takes a strong women to apologize & makes a forgiving women even stronger! #ThisTooShallPass

Rancic offers an on-air, minute-long apology to Zendaya regarding her comments about the artist’s dreadlocks.

This incident has taught me to be a lot more aware of cliches and stereotypes — how much damage they can do. And I am responsibile, as we all are, to not perpetuate them further.

A Statement From Giuliana About Last Night's Fashion Police | E!

I WILL NOT BE DRAGED INTO THIS! The situation is being rectified like ADULTS by both parties. I hope you can leave it to them & do the same!

I DID NOT MAKE THE WEED COMENT. I DO NOT CONDONE RACISM SO AS A RSULT OF THIS IM SEREIOULSY QUESTIONONIG STAYING ON THE SHOW!

Zendaya responds to criticisms of her dreadlocks on the Oscar red carpet via Twitter:

Rancic and Griffin describe Zendaya’s dreadlocks during Fashion Police‘s Oscar red carpet commentary. Rancic refers to the same hairstyle, on Kylie Jenner, as “edgy” and “cool”, but says Zendaya looks like she:

Seacrest interviews Rancic during On Air With Ryan Seacrest about her signature brand of wine XO,G.

It basically comes with four shatter-proof cups stacked on top of each other that make up one bottle. You know what’s great about it? At the end of the day, sometimes all you want is one glass of wine. You don’t want to open a whole bottle of wine and drink a whole bottle of wine So that’s why we created this. So that you can just have one glass of wine whenever you want at any time.

Giuliana and Bill give an interview on The Arsenio Hall Show. They talk about Giuliana’s pet chicken and her surprise birthday dinner.

I brought everyone over and I said, “By the way we are going to see my chickens” right? So I’m like looking for my chicken’s around the backyard and I’m like “Oh no where are my chickens?’

Seacrest interviews Rancic during On Air With Ryan Seacrest and questions her about her TV show Beyond Candid with Giuliana.

What’s different about this show from other interview shows is it’s kind of gritty. It’s all raw footage [like] we’re talking while they’re fixing lights. 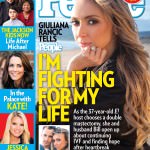 Rancic appears on the cover of People to discuss being diagnosed with cancer and the double mastectomy she plans on undergoing. Rancic also describes how she and her husband challenged this diagnosis head on.

I started crying, and Bill pulled me into bed and was holding me. I didn’t think the surgery was really ever going to come. Nor could she absorb the hard truth that the breast cancer she’d been diagnosed with almost three months earlier had not vanished, despite a double lumpectomy performed just two months ago. I thought it was going to disappear.

Seacrest interviews Rancic during On Air With Ryan Seacrest about how drama between her and LeAnn Rimes started.

What was happening was, I wasn’t actually on Fashion Police. They’ve got the story wrong. For Huffington Post, I was doing an interview over there, we were talking about the new restaurant, and he said, ‘What celebrity would you like to feed who you think is really skinny right now? So the first person that came to mind, because of that bikini shot of her a couple of weeks ago had just come out, I said, ‘LeAnn Rimes.’ I said, ‘I know she’s lost a lot of weight, but I like her when she’s curvier because I interviewed LeAnn Rimes when she was on a Shape Magazine cover just come out and I thought she looked amazing.’ So that’s all I said. It was pretty harmless. I wasn’t saying she’s like ugly-skinny or you know, needs to gain weight. It was just like I like her curvier.