Giuliana, I appreciate your apology and I’m glad it was a learning experience for you and for the network. I hope that others negatively affected by her words can also find it in their hearts to accept her apology as well.

Osbourne praises Rancic and Zendaya via Twitter for making peace over Oscars controversy.

It takes a strong women to apologize & makes a forgiving women even stronger! #ThisTooShallPass

Rancic offers an on-air, minute-long apology to Zendaya regarding her comments about the artist’s dreadlocks.

This incident has taught me to be a lot more aware of cliches and stereotypes — how much damage they can do. And I am responsibile, as we all are, to not perpetuate them further.

A Statement From Giuliana About Last Night's Fashion Police | E!

I WILL NOT BE DRAGED INTO THIS! The situation is being rectified like ADULTS by both parties. I hope you can leave it to them & do the same!

I DID NOT MAKE THE WEED COMENT. I DO NOT CONDONE RACISM SO AS A RSULT OF THIS IM SEREIOULSY QUESTIONONIG STAYING ON THE SHOW!

Zendaya responds to criticisms of her dreadlocks on the Oscar red carpet via Twitter:

Rancic and Griffin describe Zendaya’s dreadlocks during Fashion Police‘s Oscar red carpet commentary. Rancic refers to the same hairstyle, on Kylie Jenner, as “edgy” and “cool”, but says Zendaya looks like she: Zendaya appears on the cover of the February 2015 issue of Teen Vogue magazine. She talks about her show Shake It Up, her album, and her confidence.

My passion was always in the arts. I was that weird 8-year-old who was into Shakespeare.

Lifetime tweets that Zendaya will no longer play the role and that the film will be shelved for now. Aaliyah’s family, who are not participating in the project, were reportedly not happy with the decision to cast her.

We are sad Zendaya will no longer portray Aaliyah. Production is currently on hold.

Let me just explain something. The reason why I chose not to do the Aaliyah movie had nothing to do with the haters or the people telling me I couldn’t do it, I wasn’t talented enough, or I wasn’t black enough. The main reasons were the production value wasn’t there, there were complications with the music rights, and I just felt like it wasn’t being handled delicately considering the situation. And I tried my best to reach out to the family on my own, and I wrote a letter, but I was unable to do so therefore I felt not morally OK with moving forward with the project.

Because it’s someone that I honor and I respect so much, it has to be 128 percent, especially for all her fans, including myself. I didn’t feel like it [the production] was all the way there, so I didn’t want to do that. And when the time comes when it’s done right and it’s 100 percent, by all means, I will be the first person there ready to go. 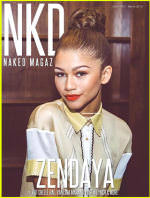 Zendaya appears on the cover of the March 2014 issue of NKD magazine. She talks about Dancing With the Stars, her album, and being a role model.

Spotlights are used to highlight something in someone that can bring a spotlight to other people. I wanted to be a good influence on my demographic. Their parents have told me they’re proud of me and that they want their kids to be like me.

Zendaya performs Replay on The Ellen Show from her self titled album Zendaya.