At a concert in Philadelphia, Styles motions for a fan’s banner reading ‘Hi Harry. Your so nice’ to be handed to him. He takes out a pen and adds the missing apostrophe and letter ‘e’ to make it ‘You’re so nice’. He then holds up the corrected sign to show fans.

Thank you for signing my poster and correcting my grammar!!

Harry Styles corrects grammar on a fan's sign from the stage

One Direction plan an extended break as the members work separately on different projects. One Direction will promote their latest album until February and released the official music video of their single, Drag Me Down before their extended break.

Three years after the end of their romance, Swift has put Styles into the past. Source:

Taylor once thought she loved Harry, but since getting to know Calvin [Harris], she’s realised that Harry was never really more than a crush. The relationship was not nearly as serious as she thought it was at the time. Taylor was more than happy to delete Harry’s number. Calvin’s made her realize that boys like Harry are toxic for her and given her the confidence to cut him out of her life for good. She’s determined to show Calvin she’s serious about him and wants him to feel as secure as she does. 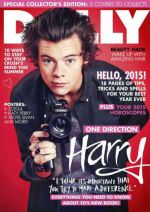 Styles appears on one of five covers of the January 2015 issue of Dolly magazine. The other members of One Direction appear on the other four covers.

As an impromptu tribute to Swedish fans, the group performs a rendition of ABBA’s Mamma Mia. Harry starts the song confidently, then begins to mumble before Liam takes over. The group does not know most of the words, however the crowd supports them by singing along.

One Direction works with Rays Of Sunshine, a charity that grants wishes to ill children, to meet and greet with over 50 children. During the meet, the band takes turns to answer questions and posing take pictures with them before their Wembley Arena concert. Children who receive the One Direction wish also receive a signed t-shirt, 2 concert tickets and the band’s fragrance, Our Moment.

Liam announces via social media the release of the third fragrance, You And I, inspired by their song of the same title. The new scent will be available for purchase in the summer.

Liam- You & I Fragrance Message

A December release is set for the Where We Are Tour movie. The DVD will include their entire Milan concert at the San Siro Stadium. Unlike the This Is Us movie, there will be no accompanying documentary. However, it will include backstage footage and other bonus features.

One Direction performs Through The Dark during the Brit Awards show to promote their album Midnight Memories.

One Direction performs Kiss You on Good Morning America from their album Take Me Home.

One Direction performs a full concert during their album release party for their album Midnight Memories. Last First Kiss, Story Of My Life and Best Song Ever are among the songs performed.

One Direction performs Story Of My Life during the American Music Awards to promote their album Midnight Memories.

One Direction signs a £10 million (over $17 million) with Cowell’s Syco records that includes two studio albums and a greatest hits collection. The contract will commence after the release of the third album in November and end in 2016.

One Direction performs One Way Or Another the during the Brit Awards to promote their album Midnight Memories.

One Direction 'One Way Or Another' | BRITs 2013 I OFFICIAL HD

One Direction performs Kiss You during the NRJ Awards to promote their album Take Me Home. 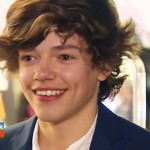 Lookalike Jacob Skelton, 15, has become an internet sensation and famous in his own right after a friend posted a photo of him online pointing out his resemblance to the One Direction member. The teenager said: ‘People always ask for pictures with me on the street and on Twitter I’ve got a lot marriage proposals.’ He revealed how he never even knew who Harry Styles was and had never watched X Factor before a friend’s mother claimed he looked like 18-year-old Styles.

He now has more than 11,000 followers on Twitter, is frequently stopped in the street by fans and has been invited as a guest on to TV talk shows.

The couple team up to sing a rendition of Kenny Rogers and Dolly Parton’s classic Islands in the Stream and Sir Elton John and Kiki Dee’s classic hit Don’t Go Breaking My Heart before heading back to their hotel in the early hours. Taylor, and Ed Sheeran then joined Styles and his One Direction bandmates to sing Backstreet Boys’ 1998 hit I Want It That Way. Styles:

Last night was the best thing I have ever done. We’re on an Island over the Stream…

Swift, who has reportedly been house-hunting in the UK close to the 3 million pound ($5.8 million) home Styles bought earlier this year, is reportedly set to meet her 18-year-old boyfriend’s parents at a to attend a top secret Christmas party after his performance in Madison Square Garden, New York, next week. Source:

He’s been very hush-hush about Taylor but this is the perfect chance to introduce her to them.

I was a bit drunk and I grabbed him and I sort of hugged him, smelled his hair and then one of his management ushered me away. But I got a picture and that’s all that counted. His hair smells like the first leaves of autumn, that really fresh smell. And sex.

Anne Cox used her son’s name to help sell her Mini Cooper for £6,000 on eBay after describing it as ‘owned by Harry Styles’ mum’. Cox also promised to meet the eventual buyer of the car – which was bought by the 18-year-old singer as a Mother’s Day present last year – as an extra incentive to encourage people to bid, as well as adding a picture of Harry driving the convertible. The vehicle’s description on eBay reads: ‘Harry Styles of One Direction bought this stunning car for his mum Anne as a Mother’s Day present in 2011. The vehicle was eventually bought by a woman from Newcastle upon Tyne.

The ad features One Direction and NFL quarterback Drew Brees.

The album debuts at number one on The Billboard 200, selling 176,000 copies in its first week, which makes One Direction the first U.K. group to debut at number one with their first album.

The band sings Natalie Imbruglia’s ”Torn”, but come in third place to Matt Cardle, who wins, and runner-up Rebecca Ferguson. Cowell says, “This is just the beginning for these boys.”

The band sings Rihanna’s Only Girl in the World. Cowell is not available to mentor the band as he is sick. Malik’s grandmother dies so he misses rehearsals for the second performance , Snow Patrol’s Chasing Cars.

The band attends the premiere for The Chronicles of Narnia: The Voyage of the Dawn Treader.

The band’s first performance is Bryan Adam’s Summer of ’69. The second performance is Joe Cocker’s You are so Beautiful puts them through to the semi final. The band also appears on a Charity single.

For Beatles week the band sings ”All You Need is Love”. Styles is particularly excited as he is a Beatles fan. Walsh calls them “The Fab 5”.

The band watch an international soccer game between England and France (England lost). They meet some of the players including Rio Ferdinand and Steven Gerrard.

For “Elton John week” the band sings Elton John’s ”Something About The Way You Look Tonight”. Cowell says, “this is the first time in all the years of X-Factor that I genuinely believe that a group are going to win this competition” and notes that the boys have been responsible for their own image.

The band go to the Premier of ”Harry Potter and The Deathly Hallows (Part 2)” in London. where they meet Daniel Radcliffe and Emma Watson.

For Halloween the band sings Bonnie Tyler’s ”Total Eclipse of the Heart”. Danny Minogue says, “You are a boy band doing what boy bands doing exactly what a boy band should do”.

After changing their initial song, the band goes through with Pink’s ”Nobody Knows”. Loius Walsh says, “it’s like five Justin Bieber’s”. The band say that on their recent shopping trip that Styles got the most autographs.

At sound check Styles is sick with nerves. Even so, One Direction go through with [[Kelly Clarkson]]’s ”My Life would Suck Without You”. Cowell says One Direction are “the most exciting pop band in the country today”.

One Direction go through with [[Coldplay]]’s ”Viva La Vida”

One Direction goe through to the finals after singing Natalie Imbruglia’s ”Torn” to Cowell and Sinitta in Spain.

None of the boys are chosen to be one of the final contestants. However, five boys are called back to the stage to be given a second chance as a newly-formed boy-band (from 4:45 in the video below).

Styles is not chosen to be one of the final contestants. However, he and four other boys are called back to the stage to be given a second chance as a newly-formed boy-band (from 4:45 in the video below).

Styles auditions for the British version of The X-Factor, singing “Isn’t She Lovely” by Stevie Wonder. He says he is working as a baker and is the lead singer in a band called White Eskimo.

Styles receives yes votes from Nicole Scherzinger and Simon Cowell and one no from Louis Walsh.

Styles progresses through multiple rounds until he is kicked off at Bootcamp.