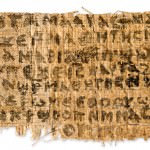 Karen King, a historian of early Christianity, presents her claim at the International Congress of Coptic Studies in Rome,  that the faded, fourth-century scrap of papyrus is “The Gospel of Jesus’s Wife.” One line of the torn fragment of text purportedly reads:

Jesus said to them, ‘My wife …'” The following line states, “she will be able to be my disciple.

The fragment, written in Coptic, the language of a group of early Christians in Egypt, has an unknown provenance, and its owner has opted to remain anonymous. King first examined the privately owned fragment in 2011. King has cautioned that the discovery is not proof that Jesus was actually married. The text appears to have been written centuries after he lived, and all other early Christian literature is silent on the question of his marital status.

This fragment suggests that some early Christians had a tradition that Jesus was married. There was, we already know, a controversy in the second century over whether Jesus was married, caught up with a debate about whether Christians should marry and have sex.