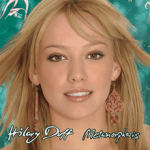 I’ve gotten to collaborate with some writers and tell them what I want to sing about and my sister is actually writing about three songs for my album.