What's this? This is an unbiased just-the-facts news summary about ISIS, extracted from the original article by Newslines' contributors. To see the newsline of each topic, click the links below. Learn more 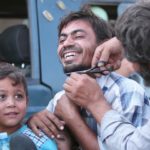 Islamic State releases hundreds of civilians they used as human shields while fleeing a crumbling stronghold in northern Syria. The retreat from the city, which IS captured in 2014. marks the militants’ worst defeat yet at the hands of the Syrian Democratic Forces (SDF), an Arab-Kurdish alliance supported by US air power. Fleeing fighters took around 2,000 civilians, including women and children, on Friday to ward off air strikes as they headed to the IS-held frontier town of Jarabulus, according to the SDF.