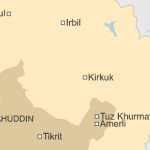 The Iraqi Army, Shiite militias and Kurdish peshmerga launch operations to free the northern town of Amerli, where 15,000 minority Shia Turkmen have been under siege by ISIS for two months. The combined forces are reported to be mounting an assault on two fronts in the Salahuddin Kurdish area, with peshmerga fighters said to be west of Tuz Khurmatu, just north of Amerli, and Iraqi army units and Shia militia are approaching Amerli from the south. The Iraqi Air Force is providing some cover on the southern approach. The operation is reported to have two objectives: to break the siege of Amerli and to reopen the main highway leading north from Baghdad.