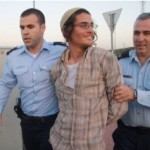 Ettinger is arrested due to his involvement in a right wing network. More arrests are expected to follow. Spokesman:

As Israeli investigators released their findings that a right-wing Jewish terrorist network is gaining power throughout Israel and illegal West Bank settlements, they detained Meir Ettinger, the grandson of the late Meir Kahane, but declined to charge him with the arson attack Thursday night that burned a baby to death and severely wounded his mother, father and 4-year old brother.

Ettinger smiles and jokes with onlookers as he was taken into custody.