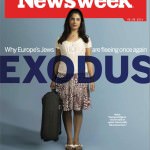 Newsweek devotes its cover story to Jewish emigration from Europe, which it says is being driven by anti-Semitism. Author Adam LeBor:

The mob howled for vengeance, the missiles raining down on the synagogue walls as the worshippers huddled inside. It was a scene from Europe in the 1930s – except this was eastern Paris on the evening of July 13th, 2014. LeBor says the 2014 Gaza conflict is partly to blame, but the rise in ‘the world’s oldest hatred’ predates the war:

One weekend in May seemed to epitomise the darkness. On May 24th a gunman pulled out a Kalashnikov assault rifle at the Jewish Museum in Brussels and opened fire, killing four people. The next day the results of the elections to the European parliament showed a surge in support for extreme-right ­parties in France, Greece, Hungary and Germany.