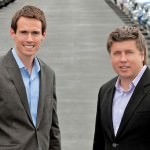 Biter and Sarasota Ford operations manager, Matt Buchanan, son of U.S. Rep. Vern Buchanan, launch Dealers United. The plan is to build a nationwide network of dealers that will have combined buying power with vendors.

The firm creates deals services common to many dealers, from search-engine optimization to customer management software. Network members decide independently if they want to buy into the deal.

Biter and Buchanan say they will spend at least $1 million in startup costs on the business. Five employees have already been hired and Biter plans to hire at least five more for a Dealers United call center.

Buchanan: We are going to work for the dealers. We’ll be more powerful than any one group.