Depp appears on the October 31 issue of Entertainment Weekly as a part of a series of covers to promote Disney’s musical Into the Woods. Depp plays the wolf in the film which is a twisted take on the Brothers Grimm tales. Into the Woods opens in theaters on Christmas Day. Director Rob Marshall:

I didn’t want this to look like a cartoon world. It’s not sunny, sunny, sunny—we wanted a sense of danger. 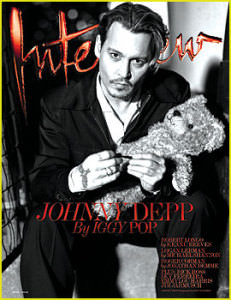 Depp appears on the cover of the May 2014 issue of Interview magazine. He talks about his role in Transcendence, reality TV, and his musical approach to acting.

I still approach a scene as one would approach a solo. There’s nothing set or pat. I don’t know what the f-ck’s going to happen until I get in there. Just like when you’re in the booth and you’re playing a guitar solo, you don’t exactly know how you’re going to phrase this or that. Which I think is beautiful. That idea of chance. Depp appears on the cover of the July 2013 issue of Rolling Stone magazine. He talks about relaxing, retirement, and duct tape on his jeans.

I realized one morning as I was going to a thing my boy had at school – one of those things where, you know, they get up and sing a song? I had to be there at a certain time, and, of course, I was running late and I was reaching back to check and see if I had my wallet and passport and stuff. I always have a passport for some reason. And so I reached back and I thought, ‘Jesus Christ!’ There was this really long tear – and there were no undergarments involved. That’s the general approach. And so, yeah, I just immediately looked for duct tape. I know, it’s pathetic. And then I continue to wear them. 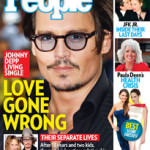 Depp appears on the cover of People after splitting from his longtime girlfriend of 14 years. The couple’s relationship was strained after they started spending more time apart. When Depp’s career took off, their relationship started to fizzle. Source:

Johnny and Vanessa are as big a Hollywood glamour couple here as Brad and Angelina. Everyone expected they’d come together until the morning of the screening. We couldn’t believe they wouldn’t come together. 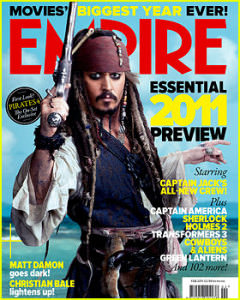 Depp appears on the cover of the February 2011 issue of Empire magazine. Jolie and Depp appear on the cover of a November 2010 issue of Entertainment Weekly magazine. They talk about each other. Jolie says:

We’re both not that social. I don’t think either one of us goes out of our house, especially in France. We’re both locked away. Depp appears on the cover of the February 2010 issue of GQ magazine.