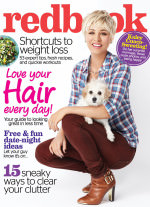 Cuoco appears on the cover of Redbook. Cuoco tells the magazine she does not consider herself to be a feminist.

It’s not really something I think about. Things are different now, and I know a lot of the work that paved the way for women happened before I was around… I was never that feminist girl demanding equality, but maybe that’s because I’ve never really faced inequality. I cook for Ryan five nights a week: It makes me feel like a housewife; I love that. I know it sounds old-fashioned, but I like the idea of women taking care of their men. I’m so in control of my work that I like coming home and serving him. My mom was like that, so I think it kind of rubbed off.