What's this? This is an unbiased just-the-facts news summary about Katy Perry, extracted from the original article by Newslines' contributors. To see the newsline of each topic, click the links below. Learn more 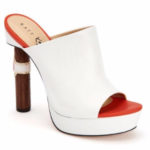 Perry gears up to launch her very first shoe line, Katy Perry Collections, which will open on katyperrycollections.com on February 16. Perry says she named each of the pieces in the collection after her friends and family. These include The Hillary shoe which is named after Hillary Clinton and The Lena, named after Lena Dunham.

I’ve been courting this idea for several years. For half my career, people have been asking me when I’m getting into fashion. It’s always been simmering under the surface, but I wanted to do it the right way and be the real creative contributor. This is something that I’ve created from the bottom up…I’m a big fan of very unique shoes. There are so many different vibes [in the line] because that’s who I am, and I love so many different things. They all represent my personality and the many moods and characters I’ve displayed throughout my life and career. Fashion is a way to express yourself, so I wanted to make personality pieces that will help you put an exclamation mark at the end of your wardrobe. We can say we’re funny or romantic or serious or sarcastic just by how we display ourselves.