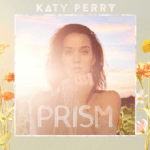 Perry releases her fourth studio album Prism. The 13 track record features collaborations with Juicy J. on the track Dark Horse as well producers Dr. Luke, Max Martin and Benny Blanco. Prism was recorded in Santa Barbara, Ca. and Stockholm, Sweden and is the second-best selling album released by a woman in the United States in 2013.

I was really inspired by this little six-minute thing by Eckhart Tolle where he speaks about loss. When you lose something, all your foundations crumble—but that also leaves a big hole that’s open for something great to come through.