Kesha files a lawsuit against Dr. Luke, her producer of ten years, for sexual assault and battery. She alleges that Dr. Luke sexually, verbally and emotionally abused her, as well as forced her to use drugs and alcohol. Kesha’s lawyer, Mark Geragos:

This lawsuit is a wholehearted effort by Kesha to regain control of her music career and her personal freedom after suffering for ten years as a victim of mental manipulation, emotional abuse and an instance of sexual assault at the hands of Dr. Luke. The facts presented in our lawsuit paint a picture of a man who is controlling and willing to commit horrible acts of abuse in an attempt to intimidate an impressionable, talented, young female artist into submission for his personal gain. Kesha is focused on moving her life and her career beyond this terrible time.

Kesha returns as a guest on Conan to promote her new network television show, Rising Star. She also shows her new “C” tattoo on her ankle, and talks about her speech restrictions on the show. She shares her love for cats and invites O’Brien to join her newly-founded cat cult.

Kesha Is Starting A Cat Cult Kesha appears on the cover of the August 2014 issue of Teen Vogue magazine. She talks about conquering her eating disorder and being stronger than ever.

My eating disorder is something I’ve been struggling with for a while. People will make up stories, but I went to rehab for an eating disorder—nothing more and nothing less.

Seacrest interviews Kesha during On Air With Ryan Seacrest and questions her about her new boyfriend.

I do, not like physically covered in dirt, but I just like them to be beardy and long hair and look like a little homeless. I like guys who look like they don’t groom themselves. I’m not into guys who are very high-maintenance. I don’t want them to take longer to get ready than me.

Ludacris joins, Kesha and Brad Paisley on the expert panel for the show Rising Star. The show will feature contestants performing in front of a huge video wall.

I’m a crusader for being yourself and loving yourself, but I’ve found it hard to practice. I’ll be unavailable for the next 30 days, seeking treatment for my eating disorder … to learn to love myself again, exactly as I am.

The artist releases his single, Timber, featuring Ke$ha, from his album,  Global Warming: Meltdown. Pitbull says that the use of a harmonica on the song was fueled by Avicii’s  single, Wake Me Up:

I’ve been all around the world touring and it was a record from Avicii that was so big and had this country feel to it. This record came down produced by Dr Luke, Cirkut and Sermstyle, and I said, ‘Man I need to get my hands on that’. And being on tour with Ke$ha, we hit it off, and what better than to have a crazy, sexy, cool, beautiful woman on it with me?

Kesha performs a medley of her hit songs including Die Young and We R Who We R during the iHeart Radio Music Festival promoting her album Cannibal.

Kesha returns to the Conan couch and presents him with custom underwear as a gift. She also talks shows her new lip tattoo and talks about her unique songwriting process, which involves her breasts. She shares the hidden meanings of some of her songs and tells O’Brien of her liking to men with full beards.

I take things too far sometimes. It was just really downhill from there, because then I started this Tumblr page and I just started putting every rogue beard I could find… just in my mouth.

Kesha performs an acoustic version of her song C’mon. 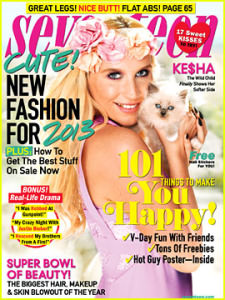 Kesha appears on the cover of the February 2013 issue of Seventeen magazine. She talks about dealing with negativity, attraction, and bullying.

I’m all about standing up to gay/lesbian/transgender bullying, but it’s also about my little brother. He’s 13 and he gets made fun of because he has a stutter. I just have zero tolerance for people making fun of others.

Seacrest interviews Kesha during On Air With Ryan Seacrest about her album Warrior.

One of my favorite moments of my life was recording with Iggy Pop. He’s like a god to me. I love him. He’s the epitome of punk rock. So, I really want all my fans to listen to that and I hope you like it.

Spears releases her single, Till the World Ends, from her album, Femme Fatale. The song’s writer, Kesha reveals:

I consider myself a songwriter before and above everything else, so it’s an honor to write for one of pop music’s biggest icons. And I hope it gets everyone’s ass on the dance floor cuz y’all know that’s what K-Monay does best!

Britney Spears - Till The World Ends 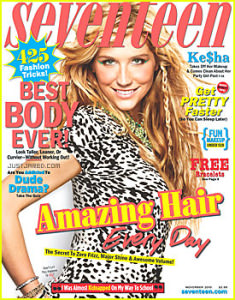 Kesha appears on the cover of the November 2010 issue of Seventeen magazine. She talks about how some people don’t get her.

I accidentally read a review, and it was really positive, but at the end it said, ‘We don’t really know if she has the best voice.’ Which is bulls—! That’s the one thing I’m most confident about. I don’t have the best body in the world, but I know for a fact that I have a really good voice. It really bummed me out that somebody didn’t see that, and then I got upset. But it just made me realize that this is an unveiling process; it’s just going to take time. I’m just proving myself to people.

Kesha performs Tik Tok during The Ellen Show to promote her album Animal.

Kesha - TiK ToK Live Performance at the Ellen Degeneres show
Do you love news? Help us add and summarize the world's news. Find out more