Australian Federal Police investigate the Bisotel Rieh money-remittance provider after financial intelligence and compliance agency AUSTRAC suspends the company for failing to declare A$9 million (US$8.08 million) that it sent overseas between January and August. A company director, Damour Sharrouf, is understood to be Khaled Sharrouf’s sister while the other company director is Ahmed Alwash, believed to be Damour Sharrouf’s husband. The investigation concerns transfers of funds to individuals in Malaysia. Staff are said to admit that it ‘actively smuggles’ money from Turkey into Lebanon. AUSTRAC chief executive John Schmidt:

The figures don’t appear to match. It’s a fairly big difference in a short space of time. We are satisfied that the continued registration … may involve a significant financing-of-terrorism risk. 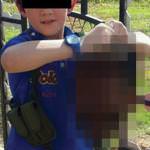 In the photographs featuring Sharrouf and his son the heads are blackened and bloated, having been dead for a week.

The former Supreme Court justice who presided over Sharrouf’s 2005 terror trial says he suffered from chronic schizophrenia and was previously a petty criminal and long-term user of ecstasy, LSD and amphetamines. Anthony Whealy:

He was a drop-out at school. He was ultimately expelled at a very early age for poor behaviour. He soon took up drugs and became involved in petty criminality and it seems that part of the people he started to mix with introduced to him a very extreme form of radical Islamic religion.

Whealy says Sharrouf was delusional and ruled unfit to plead in the 2005 terror trial and was incapable of understanding what the case was about. He believes this has not changed and that Sharrouf’s apparent radicalism is a mask for the illness:

Sharrouf now says, of course, that he tricked everybody, but I don’t believe that for a minute. He was a very ill man and I believe he still is.

Media report that Sharrouf was able to flee to Syria via Malaysia in January by skirting a travel ban placed on him. He boarded a flight at Sydney airport using his brother’s passport in place of his own, which was confiscated by authorities. New South Wales premier Barry O’Farrell:

I have to say I think that immigration and the federal police and customs have been doing a magnificent job. But I look to see what caused what appears to have been a fairly major breakdown.