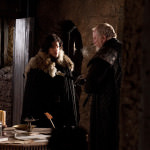 Harington appears as Jon Snow in the ninth episode of Game of Thrones, Baelor. James Cosmo plays Jeor Mormont, the Lord Commander of the Night’s Watch. Peter Vaughan plays Maester Aemon, Night’s Watch healer. At Castle Black on the Wall of Westeros, Jon is given a Valyrian steel sword for his courage in saving Jeor from an attack by an undead corpse. Jeor says that he has sent Ser Alliser Thorne to King’s Landing with the severed hand of the undead creature to prove to the king that the White Walkers exist. Jon considers deserting the Night’s Watch to join the army of his half-brother Robb Stark. Maester Aemon reveals that he is descended from the Targaryen royal family but that he remained a dedicated Night’s Watchman even though he had the chance to rule Westeros. He tells Jon that Jon must decide where his own duty lies.

Kit Harington
Add your comments below...