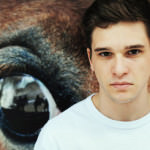 Christopher Catesby Harington is born in London, the son of David Richard Harington and Deborah Jane, nee Catesby. At the age of 11, he moves to Worcester with his parents and brother, John Catesby Harington, who is two years older. He is named after Christopher Marlowe, but discovers his full name only at the age of 11. He attends Southfield Primary School, Chantry High School and Worcester Sixth Form College. His mother, a playwright, often takes the family to Royal Shakespeare Company productions in Stratford-Upon-Avon:

That’s probably where it started for me I guess, just getting to see lots of theater.