Tyler reveals the name of her newborn son to be Sailor Gene Gardner.

He’s healthy and everyone is very happy. 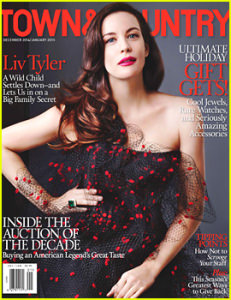 Tyler appears on the cover of the December 2014/January 2015 issue of Town & Country magazine. She talks about being pregnant, her year, and The Leftovers.

When I heard the premise, I thought, ‘That’s right up my street.’ I’m attracted to things that are a little off. Growing up I was a huge fan of The Twilight Zone, Twin Peaks, and Creepshow – things that don’t provide all the answers. Normally I’d say I’m not a competitive person; I kind of think things happen for a reason. But for the first time in my life I really went for a role.

Tyler is expecting her second child with Gardner. She is mother to nine-year-old Milo with her ex-husband, British musician Royston Langdon. Sources have said the star is “delighted” by the news and that she was “really trying for another baby”.

Tyler guests on Chelsea Lately to promote her HBO series The Leftovers. The actress also tells Handler how she and her father Steven Tyler share a lot of clothes, and how he frequently wears leopard underwear.

So funny. He wears leopard underwear all the time… My dad’s trousers are pretty tight, I think.

Tyler sits down to an independent interview about her role in the HBO original series The Leftovers and her return to acting.

I have been really interested in everything that’s been going on in television for the last few years, and in the back of my mind, I was looking for something in television. This was shooting in New York, where I live, and I have a son, and he’s in third grade, so shooting at home really appealed to me. And in the script, Meg was a 20-something-year-old redhead, so clearly I was perfect for the part.

I hadn’t read the book at that point, and even though there were only two scenes in the pilot script that she was in, I completely fell in love with this woman. It’s only happened to me a couple other times, but I always say, it’s sort of like falling in love – you can’t explain it, it just happens in an instant. I like the whole idea that this event happens, but the story is not about the event; it’s about human beings and their journey and their pain afterwards. I’m always very attracted to ensemble, character-driven stories, so I liked that aspect a lot too.

What's this? This is an unbiased just-the-facts news timeline ('newsline') about Liv Tyler, created by Newslines' contributors. Help us grow it by finding and summarising news. Learn more