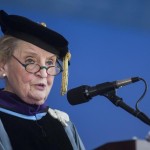 Albright praises the Tufts community for its activism during her commencement ceremony address.

You have stood up on behalf of workers, you have spoken out against the scourge of sexual assault, you have made clear that black lives matter, and you have pressed for action on climate change. All I see are doers … when I tell you the world needs you, I really, really mean it. I wanted to use the fine education I received for more than meaningful dinner conversation. I wanted to give something back to this country that had given so much to me. I insist that you put your opinions to the test, when required, you dare — as Tuft’s motto suggests — to be voices crying for peace and light. Because your choices will make all the difference to you, and to us all.

I have believed that Iraq is the biggest disaster in American history. It has ruined America’s reputation or damaged it … What it did was militarize democracy and make it very hard, and I think it has put us in a very bad position in the Middle East … I think that going into Iraq – God knows why – has kind of disturbed all of it, and we haven’t put it back together, and I think it’s going to need an awful lot of thinking from scholars and practitioners doing stuff together.

Conan takes to twitter to discuss dressing as Albright for Halloween.

.@ConanOBrien I'm considering going as hunky Conan O'Brien – but that might be too far fetched.

Former Secretary of Defense Gates and former Secretaries of State Rice and Albright discuss Vladimir Putin’s perception of history and world affairs at The Aspen Institute.

Albright is interviewed for the PBS Makers series. She talks about her life and political career.

Women are very lucky in many ways, because our life does come in segments. Some of it broken up  by the time to have children, or have a career. So I think that women can do everything, they just can’t do it all at the same time.

Albright talks about the impact that the Sept. 11 terrorist attacks had on the United States in an interview with O Magazine.

It makes us all realize that what we care most about is family. After such a crisis you want to just touch them—and if you can’t physically touch them, you want to at least make sure they’re all right. That gives you a sense of security. And then you think about your country: Why did this happen here? The horror of this was so unimaginable, you almost had to ask other people, Did this really happen? It was like waking up from a nightmare.

After her nomination is unanimously confirmed by the Senate, Albright is sworn in.

To Secretary Christopher, I want to express my gratitude. I can only hope that my heels can fill your shoes.

The family settles in Long Island and Albright starts graduate studies at Columbia University, where she obtains her doctorate in International Studies. At Columbia, Albright is active as a campaign worker and fund-raiser for Democrat Senator Edmund Muskie.

Korbelova meets Albright while working as an intern at The Denver Post. They marry in Wellesley shortly after.

Korbelova immigrates to the United States on the SS America, after a Soviet-sponsored Communist coup seizes power in Prague. Her father becomes the founding Dean of the School of International Relations at the University of Denver (where he later trains another female secretary of state, Condoleeza Rice).

Having been forced to flee my native Czechoslovakia two times – first from the Nazis and then from the Communists – I learned at a young age that human freedom is both immeasurably precious and inherently fragile.

Korbelova flees to England with her family after the Nazis occupy Czechoslovakia. Though Albright long believed they had fled for political reasons, she learned as an adult that her family was Jewish and that three of her grandparents had died in Nazi concentration camps.

And I think as a lot of people now know, and I didn’t know, but I was of Jewish background, so there is a pretty good chance that I might have died in a concentration camp if my parents had not been brave enough to bring us out of that. My parents had in fact made very clear to me that the suffering of other people, under great evil, was something that could not be tolerated.

I have always thought of myself as a Czechoslovak Catholic. My parents were of the generation who thought they were the children of a free Czechoslovakia, the only democracy in central Europe. This was their pride [and] that is what I grew up with. Albright is born as Maria Jana Korbelova in Prague, Czechoslovakia (now the Czech Republic). Her father, Josef Korbel, is a member of the Czechoslovakian diplomatic service. Her mother, Mandula, is a homemaker. Her grandmother gave her the nickname “Madeleine” when she was young, and her name was legally changed when she was an adolescent. She has a younger sister Katherine.