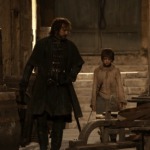 Williams appears as Arya Stark in the tenth episode of the first season of Game of Thrones, Fire and Blood. Francis MaGee plays Yoren the Night’s Watchman. Joe Dempsey plays Night’s Watch recruit Gendry. Following the execution of her father, Yoren smuggles Arya out of the city of King’s Landing disguised as a boy. Intending to take her north to the Stark stronghold Winterfell, he tells her that they will be traveling with other Night’s Watch recruits made up of criminals, and she must not reveal her identity. The recruits Lemmy and Hotpie, played by Eros Vlahos and Ben Hawkey, try to take her sword Needle but she threatens them that she has already killed a boy with it and will do so again. Gendry, who is secretly the illegitimate son of King Robert Baratheon, protects Arya from the other recruits.