What's this? This is an unbiased just-the-facts news summary about Amy Mainzer, Malala Yousafzai, extracted from the original article by Newslines' contributors. To see the newsline of each topic, click the links below. Learn more 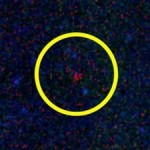 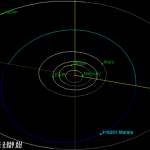 Mainzer names Asteroid 31620, in the Main Belt between Mars and Jupiter, after Yousafzai. The offical name is 316201 Malala (2010 ML48). The object is about 2.5 miles (4km) in diameter and features an extremely dark surface, one resembling the color of printer toner. It completes a full orbit once every 5.5 years. The Asteroid was discovered in 2010. Mainzer:

It is a great honor to be able to name an asteroid after Malala. My postdoctoral fellow Dr. Carrie Nugent brought to my attention the fact that although many asteroids have been named, very few have been named to honor the contributions of women (and particularly women of color)…My advice to young girls is that science and engineering are for everyone! We desperately need the brainpower of all smart people to solve some of humanity’s most difficult problems, and we can’t afford to reject half the population’s. Plus, it is a wonderful feeling to learn about the world around you – it’s a job you will fall in love with each day.