What's this? This is an unbiased just-the-facts news summary about Mark & Mary Devlin, extracted from the original article by Newslines' contributors. To see the newsline of each topic, click the links below. Learn more 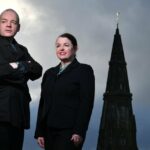 Mark & Mary are interviewed in Scotland on Sunday about The Majority and the #ResignSturgeon campaign.

We represent the silent majority of people in Scotland, who are angry and frustrated by Nicola Sturgeon’s shenanigans bringing international shame on Scotland. When we left that time, the SNP were just 5 per cent in the polls and just a nutter and cranks, or rightly viewed that way. To some extent the big question was ‘how did this happen?’. We talked about the boiling frog, the frogs in the pot that don’t realise they are being slowly boiled. The casual nationalism and seeing that is quite disturbing – this rise in anti-English sentiment, a rise in centralisation of power in Edinburgh, just things that people in Scotland might not notice as much…The response was very positive and it’s clear people are looking for something, and I think that’s why we’ve grown quickly, to 14,000 followers on Twitter and 25,000 on Facebook.

On the Scottish Parliament, Mark says:

The nature of constitutional arrangement should be something that should be looked at at all times. There should be more discussion on what alternatives there are to a Scottish Parliament and is the Scottish Parliament delivering for the Scottish people? For the last 14 years it hasn’t delivered. Does that mean it has to be abolished? I don’t know. If you have a system that can be taken over by nationalists and used as a vehicle for separation, then I think it doesn’t fit the purpose or intention of what it’s for.