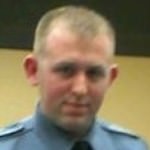 Police Chief Thomas Jackson releases Wilson’s name to the public to ease tension and satisfy freedom of information to the public. Wilson is a 28-year-old police officer that has been on the force for six years. He spent two years as a police officer in the city of Jennings and four years with Ferguson. Jackson: