An arrest warrant is issued for Baryalei after he is identified by ABC’s 7:30 investigative program as Australia’s most senior ISIS member. Authorities say he has used a trusted position in ISIS operational command to funnel more than half of the 60 Australians currently fighting in the wars in Iraq and Syria, including senior fighters Mohamed Elomar and Khaled Sharrouf. They say he has also facilitated the recruitment of at least two 17-year-old boys and at least seven Australians who have gone on to be killed in Syria and Iraq. Federal police spokesman:

Should Baryalei return to Australia, this warrant authorises law enforcement to arrest him immediately. 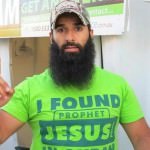 An investigation by ABC’s 7:30 program identifies 33-year-old Mohammad Ali Baryalei from Sydney as Australia’s most senior ISIS member. Baryalei is from an aristocratic Afghan family that came to Australia as refugees as a child, and has worked as a security guard in King’s Cross and made a brief appearance as an extra on the true crime show Underbelly. Police say that in 2013 he traveled to Syria to fight with extremist groups and has since become the top recruiter of Australians to ISIS, involved in its operational command in Syria and Iraq as a facilitator for Australians traveling to join jihad. Baryalei in an intercepted phone call with his handler in Sydney:

Four brothers coming this week. They are leaving Australia. Going to try to get them by the weekend. Abu Qaqa is the tall one that was doing Dawah with you. … The brothers yesterday, they were crying, affected, none of them wanted to stay in this country one second.