After complaints from nine people, an advert for Paddy Power that urged punters to “always bet on black” before the Floyd Mayweather fight with Conor McGregor has been banned by the Advertising Standards Authority (ASA), who said it was likely to cause “serious offence”. Paddy Power claimed the ad was not intended to cause offence on the grounds of race.

PaddyPower reports that 92 per cent of bets that have been placed in Ireland on the McGregor-Mayweather fight have been for McGregor to win. The unexpected support at the bookies has prompted Paddy Power to cut McGregor’s outsider odds from 13/2 to 4/1 in recent days:

Given the nature of the betting, we’d be left more battered and bruised than any of the Dubliner’s previous opponents should he upset the odds.

Bookies are also offering bets on whether Sinead O’Connor’s will sing The Foggy Dew (5-2) and whether McGregor will do the Billionaire Strut (1-2), if Mayweather will win in a first round KO (33-1), McGregor will be disqualified for kicking (10-1), and whether his next fight is with a bear (100-1), Hulk Hogan (500-1) or UFC lightweight title rivals Khabib Nurmagomedov (6-4) or Tony Ferguson (6-1).

Paddy Power offers 250/1 on McGregor entering and winning WWE Royal Rumble, which takes place on 29 Jan. If McGregor did enter the Rumble he would most likely have the biggest target on his head since Vince McMahon put a $100,000 bounty out on Stone Cold Steve Austin at the 1999 edition. 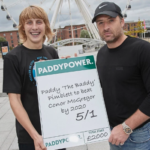 Pimblett is given a £2000 charity bet from Paddy Power, with 5-to-1 odds that he will defeat McGregor before 2020. If Pimblett is successful, Paddy Power will pay his chosen charity, Fight For Autism, £10,000. Pimblett:

I’m not afraid of anyone. I’ll take them on, anywhere, anytime – McGregor included!

Paddy’s not a lad who’s short on confidence and we were more than happy to give him a bet on himself when his management team reached out to us. Given his talent he’ll be circling the waters with the big fish in no time, and should he beat McGregor it’ll sting as much as his right hook but a great cause will benefit.