In his final screen appearance, Hoffman plays German counter-terrorism expert and rogue agent Gunter Bachmann in this thriller directed by Anton Corbijn. When terrorist activity appears imminent, Bachmann sets out to extinguish the threat and learn the truth behind a half-Chechen, half-Russian tortured immigrant who has appeared in Hamburg’s Islamic community. Co-starring Rachel McAdams. Corbijn speaks of working with Hoffman.

Philip had such an incredible delivery. I was making a point yesterday that I sometimes shot scenes in one take, because I liked it so much. 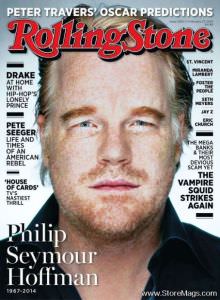 Rolling Stone devotes the cover of its second February 2014 issue to Hoffman. Hoffman’s friend David Katz has an interview with the magazine.

He was on an upward spiral. [Hoffman] believed you don’t have to die with a needle in your arm to be a great artist. Hoffman appears on the cover of People after passing away due to a combination of different drugs that were taken.

Hoffman is found dead of an apparent drug overdose in his Manhattan apartment by a friend, screenwriter David Katz.   He is survived by his parents, three siblings,  his partner, and three children. Katz speaks of Hoffman’s passing.

I saw him last week, and he was clean and sober, his old self. I really thought this chapter was over.

That’s the best way to do a film. That’s the way you rehearse — you develop it, you work with the writer and director and talk and bullshit, and then you eventually shoot and you’re on the same page. Film’s hard when you don’t have any relationship with the director at all and you just show up. Then you really are just a gun for hire. But that doesn’t happen so often with me.

Hoffman plays Plutarch Heavensbee, the Head Gamemaker, in this sequel directed by Francis Lawrence. Katniss Everdeen and Peeta Mellark win the 74th Hunger Games and become symbols for revolution, so winners of the previous Hunger Games are assembled for the 75th Hunger Games, known as the Quarter Quell, to bring them back into the ring. Co-starring Jennifer Lawrence, Josh Hutcherson, Liam Hemsworth, and Donald Sutherland.

I liked the people involved. It’s a great group of actors. It’s a great environment. And the character was something I was attracted to. It was just an interesting role.

Seymour Hoffman is nominated for Best Supporting Actor at the 85th Academy Awards for portraying Lancaster Dodd in The Master. He speaks on the role:

He’s a fictitious character. So I tried to think of a lot of other things, in myself. I was very literal about it. I wasn’t interested in playing L Ron Hubbard, because, ultimately, it wasn’t his story, so I didn’t want it to be confusing.

It’s hard not to be disenchanted because every day we read about how nothing can get done and there’s a lot of stonewalling going on. I think this story will strike a chord with people because they will recognize that there’s a truth to it.

Hoffman is nominated for Best Supporting Actor at the 81st Academy Awards for portraying Father Brendan Flynn in Doubt.

Hoffman plays Father Flynn in this drama from John Patrick Shanley. Sister Aloysius Beauvier , a Catholic school principal, questions Father Flynn’s relationship with a young, male student and recruits Sister James to monitor the priest’s actions. It is left up to the viewer to decide if her suspicions are correct or if she wants Father Flynn removed for her own reasons. Co-starring Meryl Streep, Amy Adams, and Viola Davis. Hoffman speaks of researching the life of a priest.

Just I know this priest now and he told me about what was happening to the Catholic Church in the ’60s, and it was very informative and helpful. And then he just kind of told me…he kind of led me though the business of being a priest. The business around Mass and what they do and what they’re wearing and what it means and everything, so it was very helpful. Past that, I didn’t go in any deeper than that because the play is not really about the Catholic Church. The venue has to be convincing, but ultimately what we’re getting at is something that’s not about the Catholic Church. It’s about something else.

Hoffman is nominated for Best Supporting Actor at the 80th Academy Awards for portraying Gust Avrakotos in Charlie Wilson’s War.

Hoffman plays Gust Avrakotos, a CIA agent, in this drama directed by Mike Nichols. Texas congressman Charlie Wilson teams up with Avrakotos, a renegade, and a Houston socialite to assist Afghani rebels in their war with the Soviets. Their efforts contribute to the fall of the Soviet Union and the end of the Cold war.

I read about his life, and the things he did before this story are outrageous. When he says that people were trying to kill him, that’s something that would have come out of his mouth. When he was in Greece he did live a life where he was at risk of being killed, and his companion had been killed earlier. It was a case of one of those great characters where you could really get behind – somebody who’s life was lived in such extremes.

Hoffman wins the Academy Award for Best Actor in a Leading Role for his portrayal of American novelist Truman Capote in Bennett Miller’s biopic Capote. Hilary Swank presents the award.

Hoffman plays Truman Capote in this biographical crime drama directed by Bennett Miller. In 1959, Capote learns of the murder of a Kansas family and decides the case will be the basis for his next, and what turns out to be last, book. He goes to Kansas to research In Cold Blood, and forms a relationship with Perry Smith, one of the killers, now on death row.

What's this? This is an unbiased just-the-facts news timeline ('newsline') about Philip Seymour Hoffman, created by Newslines contributors. Make it grow it by finding and summarising news. Learn more