Reports state that Rehana has not been killed by ISIS as claimed by the group and reported in some media. Kobani-based journalist:

She is my friend and I confirm that she is alive. And the picture of beheaded female fighter is not Rehana’s picture

According to the journalist, Rehana is now in Turkey. Another friend tells the Mail Online that the beheaded victim of ISIS was not Rehana:

A Kobani-based journalist says Rehana escaped the most recent clashes in Kobani and is living as a refugee in Turkey, likely in the southern Şanliurfa province:

She is in Turkey. I will try to gain her number because I lost the connection with her. She evacuated Kobane and I stayed in Kobane. At the beginning of the last clashes Rehana left Kobane. 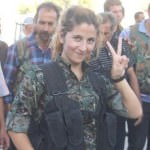 Rehana is reported to have been beheaded by ISIS. Photos claiming to show her severed head are circulated on Twitter, but her death is unconfirmed at this point. The Kurdish YPG (People’s Defense Unit) and YPJ (Women Protection Unit) aren’t able to be reached for comment.