Bullock is named World’s Most Beautiful Woman for 2015 by People magazine.

Real beauty is quiet. Especially in this town, it’s just so hard not to say, Oh, I need to look like that, No, be a good person, be a good mom, do a good job with the lunch, let someone cut in front of you who looks like they’re in a bigger hurry. The people I find most beautiful are the ones who aren’t trying.

Bullock comes to the aid of an extra who collapses from heat exhaustion on the set of her new movie Our Brand is Crisis in New Orleans. Bullock gives the woman water and fans her until the ambulance arrives.

These kids have been working a couple of jobs, some come from hard places, but every time they walk under that roof, they know they’re cared for,’ she said of the pupils. ‘They’re admired for what they can bring to the table

Bullock tops Forbes Magazine’s list of the highest earning actresses in Hollywood. It is estimated she earned $51 million dollars between June 2013 and June 2014. Her starring role in Gravity, which earned $716 million dollars worldwide, contributed to her topping the list.

Bullock is nominated for Best Actress at the 86th Academy Awards for portraying Dr. Ryan Stone in Gravity.

Even those people that have been nominated more times than I can count will probably say the same thing: you don’t expect it, you don’t assume it and it’s just sweet. 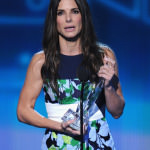 Bullock plays astronaut and medical engineer Dr. Ryan Stone in this science fiction thriller written and directed by Alfonso Cuaron. Stone is on a mission with Lieutenant Matt Kowalski , played by George Clooney, when their shuttle is destroyed by high speed debris from a damaged Russian satellite. Kowalski saves Stone from drifting off into space and then together they must find a way to get back to Earth.

We had no idea if it would be successful. You’d explain that it was an avant-garde, existential film on loss and survival in space and everyone would be like: ‘OK …’ It didn’t sound like a film people would be drawn to. Bullock appears on the cover of People to discuss life after her divorce and how her world revolves around her son, Louis. Source:

She’s raising Louis as a single mom, and she never thought it would be this way. She’s still trying to figure out her new life. She’s thrown herself into giving Louis the most regular-kid life he can have given her celebrity. From shuttling him to preschool to setting up playdates and special outings, she’s “very hands-on. She is giving him the best, most normal life she can.

Bullock and James divorce is finalized after nearly five years of marriage. Bullock filed papers in Austin, Texas, where she has a home. The papers cite discord or conflict of personalities as the reason for the split. Bullock intends to stay involved in the lives of James’ three children.

It’s not like they’re talking every day, but they’re in touch about things. It really seems like it’s about the kids more than anything.

He’s just perfect, I can’t even describe him any other way. It’s like he’s always been a part of our lives. Bullock appears on the cover of People after her husband attends treatment for his infidelities.

He realized that this time was crucial to help himself, help his family and help save his marriage. She’s sad-but getting angrier. He has been immersing himself in his children and trying to keep them from crying too much because they miss Sandra. The only way he got through this week was a lot of kisses from those kids.

The Guardian interviews Bullock about her role in the film The Blind Side.

I mean, I loved the story but I didn’t know how to play her and it was a while before I got there. The director said, after about eight months, ‘Why don’t you go and see Leigh Anne and see what I’m talking about? It’ll explain her.’ I met her and was really blown away by the energy she had. I stopped thinking about it like an actor just seeing a part, and the story is what finally got me.

Bullock pulls out of the London premiere for The Blind Side because of rumors that her husband of five years was committing adultery. James:

The vast majority of the allegations reported are untrue and unfounded. Beyond that, I will not dignify these private matters with any further public comment. There is only one person to blame for this whole situation, and that is me. It’s because of my poor judgment that I deserve everything bad that is coming my way. This has caused my wife and kids pain and embarrassment beyond comprehension and I am extremely saddened to have brought this on them. I am truly very sorry for the grief I have caused them. I hope one day they can find it in their hearts to forgive me. Bullock wins her first Academy Award as Best Actress for the movie The Blind Side. On thanking her mom:

She reminded her daughters that there’s no race, no religion, no class system, no color, nothing, no sexual orientation that makes us better than anyone else. We are all deserving of love.

Bullock is nominated for Best Actress at the 82nd Academy Awards for portraying Leigh Anne Tuohy in The Blind Side.

I’d always assumed that the road to Oscar was planned. I thought people chose projects that were considered ‘Oscar-worthy.’ No one wanted to make this film. I didn’t want to make this film for the better part of the year. Everyone is as blindsided — can I say that? — as I am.

I am only up here because I am fortunate enough to work with people that are so talented they make me look good.

Bullock plays Kate Forster in this fantasy time-travel romance directed by Alejandro Agresti. Kate is a doctor who moves out of a house by a lake and leaves a note in the mailbox for the next tenant, Alex Wyler, played by Keanu Reeves. He reads the note but doesn’t understand because when he moved into the house, it had been unoccupied for years. In his world, it is 2004, but in hers, it is 2006.  With impossible time and distance between them, they somehow strike up a correspondence and fall in love by leaving notes in that mailbox.

I was looking for a love story, I’ve always wanted to do one and I read it and as soon as I read it, it was like, you know those novels that you read when you were younger and you were absolutely lost in that scenario.

Bullock marries James in a sunset ceremony at the 300-acre Folded Hills Ranch in Solvang, Calif. Bullock wears a white lace dress designed by Angel Sanchez. James arrives at the ranch behind the wheel of a giant red monster truck. Most of the 300 guests don’t find out there’s a wedding until 8pm. Source:

She looked beautiful. She was incredibly happy.

Bullock plays FBI agent Gracie Hart in this comedy directed by Donald Petrie. Hart goes undercover as a contestant in a beauty pageant to prevent a bomb attack on the pageant, but first, she gets a head-to-toe makeover. Co-starring Benjamin Bratt, Michael Caine, Candice Bergen, and William Shatner.

They don’t have many roles like this for women in Hollywood. They had them in the 30s and 40s and then Lucille Ball sort of left with it. This is sort of my Dumb And Dumber phase.

Miss Congeniality - Trailer HD
Do you love news? Help us add and summarize the world's news. Find out more