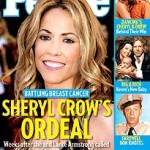 Crow appears on the cover of People after breaking up with her fiance. Just three weeks later, Crow was diagnosed with cancer. Source:

I just tried to make sure she was in a good place, to keep the energy going. I felt she enjoyed herself. Two weeks later, when Crow revealed that she had been diagnosed with breast cancer, I was shocked. I wouldn’t have known in a million years, not for a second, that this was coming.