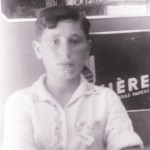 Shimon Peres, originally named Szymon Perski, is born to Yitzhak and Sarah (nee Melzer) Peres, in Poland (now Visnieva, Belarus). His father is a wealthy timber merchant and his mother is a volunteer librarian. When he is 11 years old the family immigrates to Israel (then Mandatory Palestine) and settles in Tel Aviv. He is educated at the Balfour and Geulah schools. He has one younger brother.

As a child, I grew up in my grandfather’s home. … I was educated by him. … My grandfather taught me Talmud. It was not as easy as it sounds. My home was not an observant one. My parents were not Orthodox but I was Haredi [observant]. At one point, I heard my parents listening to the radio on the Sabbath and I smashed it.

Shimon Peres
Add your comments below...