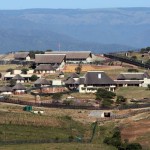 Zuma faces an official investigation over 238 million rand ($19.3m) renovations of his rural private residence in Nkandla, KwaZulu-Natal province. Upgrades to the residence include a helipad, underground living quarters with about ten air-conditioned rooms, a medical clinic for the president and his family, houses for security staff, air force and police units, underground parking, playgrounds, and a visitors’ centre. Zuma – who shares the property with his four current wives and their children – previously said he would meet most of the bill, but government documents reveal he will pay 5%. Taxpayers already maintain two state residences in Pretoria and Cape Town. The public protector has received several complaints about irregular expenditure on the residence and has begun gathering information which could lead to a full investigation. The civil society group Corruption Watch has also filed questions to the government.