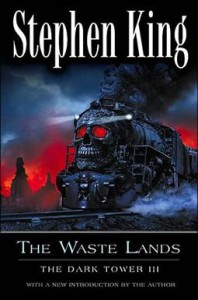 The Dark Tower III: The Waste Lands is published by Grant publishing. The book begins five weeks after The Drawing of the Three finishes. Roland moves east, away from the Western Sea to encounter a cyborg bear named Shardik. The title of the book derives from the T.S. Elliot poem ‘The Waste Land’.

I have written enough novels and short stories to fill a solar system of the imagination, but Roland’s story is my Jupiter–a planet that dwarfs all the others . . . a place of strange atmosphere, crazy landscape, and savage gravitational pull. Dwarfs the others, did I say? I think there’s more to it than that, actually. I am coming to understand that Roland’s world (or worlds) actually contains all the others of my making.