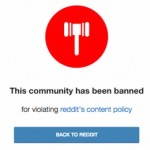 Reddit bans several offensive communities that focus on racist content, such as Coontown, WatchNiggersDie and CoonTownMeta. Subreddits that feature animated” child pornography are also banned. The company also introduces an updated Content Policy that prohibits any posts that are illegal, incites violence, harasses or threatens users or includes sexually explicit content taken without the person’s permission. Offensive communities that don’t necessarily break these rules but are nonetheless considered profane or “upsetting” may now be “quarantined,” meaning users have to opt in to see the content. Some may also have NSFW tag. CEO Huffman’s official statement:

Our most important policy over the last ten years has been to allow just about anything so long as it does not prevent others from enjoying Reddit for what it is: the best place online to have truly authentic conversations. I believe these policies strike the right balance.

We didn’t ban them because we disagree with them. We banned them because this exist solely to annoy other redditors, prevent us from improving Reddit, and generally make Reddit worse for everyone else.

Huffman participates in a Reddit AMA (link). On bringing back controversial subreddits:

Unlikely. Creating a clear content policy is another of my immediate priorities. We will make it very clear what is and is not acceptable behavior on reddit. This is still a work in progress, but our thinking is along these lines: Nothing illegal. Nothing that undermines the integrity of reddit. Nothing that causes other individuals harm or to fear for their well-being. Banning content will be a last resort…I don’t want to ever ban content. Sometimes, however, I feel we have no choice because we want to protect reddit itself.

Pao resigns from Reddit (statement). She will be replaced by Huffman, but will remain as an adviser to Reddit’s board for the remainder of 2015.

It became clear that the board and I had a different view on the ability of Reddit to grow this year. Because of that, it made sense to bring someone in that shared the same view.

I just want to remind everyone that I am just another human; I have a family, and I have feelings. Everyone attacked on reddit is just another person like you and me. When people make something up to attack me or someone else, it spreads, and we eventually will see it. And we will feel bad, not just about what was said. Also because it undercuts the authenticity of reddit and shakes our faith in humanity.

Ellen has done a phenomenal job, especially in the last few months.

The site celebrates its 10th birthday in a blog post that contains statistics about the site’s growth over the years.

Together we’ve donated over $1.8 million to Extra Life, Haiti, teachers, and Nepal. We donated another $827,659.49—10% of our 2014 ad revenue—to the top 10 charities of your choice. You’ve also donated a huge amount that we can’t begin to track through individual subreddit campaigns and spontaneous events like this.

You guys really are amazing. Thank you for making the last 10 years of Reddit amazing too. Here’s to the next 10 years.

In a video for Udacity, Huffman and Ohanian reveal that they used fake accounts to populate the site in its earliest days. Huffman:

You would go to Reddit in the early days, the first couple of months and there’d be tons of… fake users

Through those fake accounts, Huffman and Ohanian submitted high-quality content — the type of articles they wanted to read. This “set the tone” for the site as whole, Huffman says and, at the same time, made it look populated.

Huffman leaves Reddit to start Hipmunk with Goldstein. Hipmunk is a travel search site that helps people book flights easily by presenting flight results in a visual timeline that allows people to select the best flight for them at a glance. The site is funded by Y Combinator.

Our goal will be to build Reddit as an independent company by collaborating with Wired through the integration of its core technology, and by offering partnerships to allow other companies to do the same.

Reddit is founded by Huffman and Ohanian both 22-year-old graduates of the University of Virginia. In first year they had rooms across the hall from each other, and became friends through video games.

Huffman wanted to make a phone system to order subs while he was pumping gas at a local gas stand. Ohanian calls a lawyer and they formed a company called RedBrick Solutions, because Charlottesville is full of red brick buildings. In the spring of their senior year they go to Boston to see a presentation by Graham at Harvard called “How to start a start-up”. They were able to get Graham to meet them for drinks at a local bar where they pitched their phone idea. A few days later, Graham tells them to apply for his new investment fund, Y Combinator. The students travel to Boston to pitch, but are rejected. On the way back to Charlottesville Graham calls them to say he wants them to come up with another idea — a web app. They decide to match the mechanism of Delicious with the content of Slashdot to build “the front page to the web”.

Y Combinator gives them $12,000 and they move to Boston in early June, 2005. After a few weeks the site is not ready when Graham links to it from an essay, giving it site 1000 hits. Reddit was the first Y Combinator launch, taking a total of $100,000. To make the site appear popular they populate it with fake posts.

What's this? This is an unbiased just-the-facts news timeline ('newsline') about Steve Huffman, created by Newslines' contributors. Help us grow it by finding and summarising news. Learn more