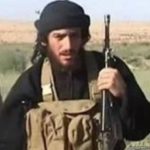 Islamic State says al-Adnani, one of its most prominent and longest-serving leaders, was killed in what appeared to be an airstrike on a vehicle traveling in the Syrian town of al-Bab, depriving the militant group of the man in charge of directing attacks overseas. US officials  stopped short of confirming Adnani’s death, as assessments often take days and often lag behind official announcements by militant groups.