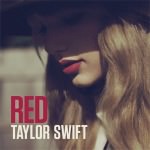 Swift releases her fourth studio album Red. The 16 track album features song collaborations with Gary Lightbody on The Last Time and with Ed Sheeran on Everything Has Changed. Swift’s new album also features her singles We Are Never Ever Getting Back Together and 22.

When I went in to make this record, I recorded the songs over a two-year period. Every time I would come up with a new song that sounded different or unique or new, compared to what I had to done before, I knew we were getting closer. What I wanted was an album that explored the edges and broke new ground. One of my big fears is people saying my songs are all starting to sound the same.