It is reported that Turkey has agreed that the U.S. may use its airbase at Incirlik to launch air strikes on ISIS. Turkey’s decision comes one day after a telephone discussion between Presidents Obama and Erdogan. US officials decline to give details of the agreement with Turkey, and spokesmen decline to confirm it officially, saying it was up to Turkey to confirm. Turkish officials decline to comment on the report.

Buyuksarac faces up to 4.5 years in prison on charges of insulting Erdogan. Buyuksarac posted a satirical poem (that criticizes Erdogan) on her Instagram site.

I shared it because I found it funny…If you Google the poem I shared (the one that does not include any insult), you will see 960,000 more people shared it… it’s interesting, isn’t it?

At least 1,000 Turks join the Islamic State over a period of time. The extremist group especially attracts disgruntled, disadvantaged youths with the enticement of money. Turkish fighters also identify more favorably with ISIS governance versus Turkish governance. A rickety district known as Hacibayram that is a tourist attraction serves as a recruitment center for potential fighters to Syria. Stein:

There are clearly recruitment centers being set up in Ankara and elsewhere in Turkey, but the government doesn’t seem to care. It seems their hatred for Bashar al-Assad and their overly nuanced view of what radical Islam is has led to a very short and narrow-sighted policy that has serious implications.

Turkey’s Prime Minister says Israel deliberately kills Palestinian civilians and that its military actions are comparable with the eugenics policies of the Nazis. Erdogan at the Istanbul Arena:

Just like Hitler, who sought to establish a race free of all faults, Israel is chasing after the same target. They kill women so that they will not give birth to Palestinians; they kill babies so that they won’t grow up; they kill men so they can’t defend their country […] They will drown in the blood they shed. 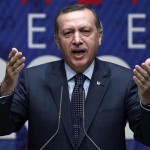 Turkey’s prime minister Ergodan calls on the Syrian president to step down.

For the welfare of your own people and the region, just leave that seat…If you want to see someone who has fought until death against his own people, just look at Nazi Germany, just look at Hitler, at Mussolini, at Nicolae Ceausescu in Romania, If you cannot draw any lessons from these, then look at the Libyan leader who was killed just 32 days ago in manner none of us wished and who used the same expression you used.

What's this? This is an unbiased just-the-facts news timeline ('newsline') about Tayyip Erdogan, created by Newslines' contributors. Help us grow it by finding and summarising news. Learn more